SIngle MOlecule Array (Simoa™) is a robust, highly sensitive immunoassay platform manufactured and serviced by Quanterix Corporation.  This technology is used for the detection and quantification of biomarkers as low as femtogram concentrations.  Simoa™ assays are utilized for biomarker assessment in multiple medical disciplines including autoimmunity, inflammation, infectious disease, neurology, cardiology and oncology.  The flexibility of Simoa™ allows for biomarker detection from numerous sample types including blood, serum, plasma, cerebrospinal fluid (CSF), urine, bronchoalveolar lavage (BAL), cell culture supernatants, and cell lysates.   The robustness of the platform is further enhanced by the ability to perform both single and multiplex analysis.

SimOa™ technology is based on the formation of ‘sandwich’ immune complexes on paramagnetic beads that are subsequently isolated in femtoliter sized wells.

Paramagnetic beads coupled to target specific antibodies (or antigens if the interest is antibodies directed to specific targets) are incubated with sample, biotinylated secondary detection antibodies, and streptavidin enzyme conjugates to form immune complexes capable of generating a fluorescent signal on individual beads.  Beads are then mixed with an enzyme substrate and loaded into sample loading discs containing femtoliter sized wells that allow for single beads to be isolated within a single well.  The heightened sensitivity of the assay via trapping of one bead in a well permits a ‘digital’ measurement of a single analyte molecule in the respective immune complex.  Analyte concentrations are determined by extrapolation from a standard curve generated during each test run.  Combined with analogue measurements for higher concentrations of analyte, the Simoa™ system ensures precision and reproducible results across a wide dynamic range.

Line immunoassays (LIA) are line blot immunoassays where multiple antigens are individually adsorbed in parallel to a solid phase (e.g. nylon) on a single test strip.  Line immunoassays are useful methods as they can differentiate, with high specificity, antibody reactivity to multiple antigens.  Through the application of different antigens on one test strip, LIA provides a multiplex testing platform to confirm and differentiate between different antigen specific antibodies present in an individual sample in one test run.

Line immunoassays are based on the formation of labelled immune complexes of antigens that are bound to a solid phase (solid phases are often individual nylon test strips). Multiple antigens are adsorbed (along with control lines to confirm assay functionality) to form a multiplex antigen test strip.   LIAs can generate a comprehensive qualitative and semi-quantitative antibody profile for a given sample on a single test strip. 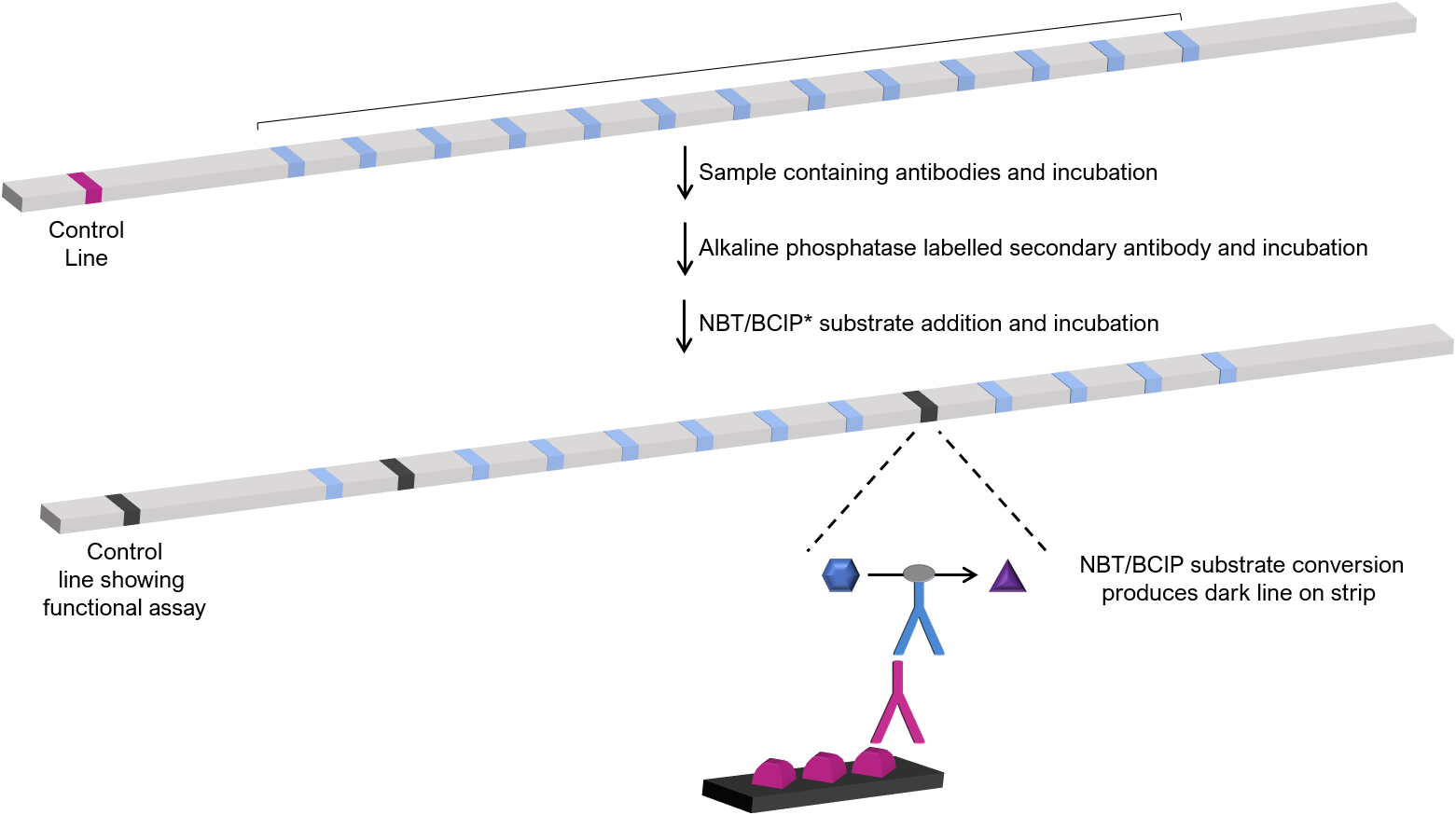 To perform the assay, diluted test samples are incubated on the test strip to allow for binding of antibodies to the cognate antigen.  Addition of alkaline phosphatase (or other enzyme such as horseradish peroxidase) labelled secondary antibodies followed by incubation with Nitro blue tetrazolium chloride/5-bromo-4-chloro-3-indolyl phosphate (NBT/BCIP) substrate results in the formation of a dark line at a designated antigen position, indicating the sample contains antibodies to that antigen.  Antibody concentration assessed by automated densitometry and is proportional to the intensity of the staining on the designated antigen line.

Cell-based assays are based on indirect immunofluorescence (IIF) protocols using cells that are transfected with a vector containing the cDNA (complimentary DNA) of a specific antigen that is subsequently over expressed by the cells.  The transfected cells containing the over expressed antigen are then used as an IIF substrate to identify antibodies present in a test sample.

Cells bound to a glass surface used in these assays are transfected with a vector containing the DNA coding region of a specific test antigen of interest.  Antigen-expressing cells are then used as a substrate for IIF to detect antibodies for the expressed antigen from a given sample:

Cell based assays offer numerous advantages including in vivo expression, maintenance of discontinuous conformational epitopes via proper folding and post-translational modifications, no antigen purification requirements, and flexibility in the choice of antigen expressed.  Multiplexing is also achieved by combining different transfected cells into cellular arrays, allowing for the simultaneous detection of several antigen specific antibodies in a single sample. Another advantage is that typically not all cells are transfected and hence a “control” cell can usually be identified to confirm the specificity of the observed IIF result. Alternatively, control cells transfected with the vector alone (no cDNA) can be seeded in an adjacent well to confirm specificity of the IIF reaction.

Luminex assays are microsphere (bead) based immunoassays capable of detecting multiple analytes within a single sample and a single test run.  Luminex assays are utilized in a multitude of clinical laboratory and research applications that require high sensitivity and accuracy for detection of specific analytes, and together with multiplexing capabilities provide rapid, high throughput, high accuracy and versatility that optimizes sample bioanalysis.

The principle of the Luminex assay:

This technology platform enables assay developers to conjugate distinct capture antibodies (or antigens) to specific bead populations with a distinct signature or fluorescent dye.  Combining different bead populations enables the simultaneous multiplexing for the detection and quantification of multiple analytes from a single drop of sample. These features make the Luminex platform (and others that use similar principles) one of the most robust and cost-effective systems used in bioanalysis.